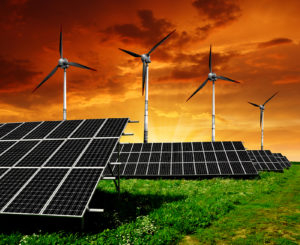 We have a never-ending supply. Wind energy doesn't pollute the air like power plants that rely on combustion of fossil fuels, such as coal or natural gas.

Wind turbines don't produce atmospheric emissions that cause acid rain or greenhouse gases. But because the wind doesn’t always blow, it can be an intermittent and unreliable source of energy until we learn how to store the energy the wind creates.

Wind energy has seen enormous growth in the last decade. According to the U.S. Department of Energy, cumulative wind power capacity increased by an average of 30% per year. However, wind energy only accounts for about 2.5% of the total worldwide electricity production. The largest environmental cost to wind turbines is the threat the turbines themselves pose to wildlife and the amount of energy that goes into making the turbines. Look at just some of the major ways wind effects the environment and a community.

Because the wind does not always blow, wind is not a reliable energy source. In addition, consumer demand for power fluctuates during the day with peak times typically being highest around 8 am, noon and between 5 and 7 pm. Unlike conventional power plants, wind turbines cannot be turned on in response to demand needs. Wind turbines respond only to the wind, so their contribution to supply is essentially random. The wind may be high when demand is low, or vice versa. If there is sufficient demand when the wind rises, wind power may reduce the need for power plants to supply power from coal or natural gas. On the other hand, if the wind drops when there is still demand, other coal and natural gas resources must quickly jump in to cover the loss. The more frequent ramping or switching of these sources of energy raises costs, lowers the power plant efficiency, and increases their emissions. One argument against wind turbines is the number of birds killed every year.  While it would be ideal to have that number be zero, we should keep this in perspective.  While wind turbines can kill up to 300,000 birds annually, the common house cat kills up to 3,000,000,000 birds annually.

The conversion of wind energy to electricity requires little downtime as the generators are strapped directly to the back of the turbine or at the base of them. This is an advantage as it cuts down on the greenhouse gas impact of transporting this renewable energy source. The real cost is the amount of energy and materials needed to build such large structures. The United States Geological Survey have reviewed the material requirements of a modern wind turbine. On average 1 megawatt of wind capacity requires 103 tons of stainless steel, 402 tons of concrete, 6.8 tons of fiberglass, 3 tons of copper and 20 tons of cast iron. In 2017, the US generated 82, 183 megawatts of wind energy.  That’s a lot of fossil fuels being used to generate wind.

Due to the pre-existing infrastructure available to transport electricity over long distances through wire, the footprint for electricity transportation is nominal. The large impact is due to the wind turbines initial transportation of it’s materials to make the turbine and then the transportation of each part to be put together on site.  Unless the material and structures are transported on an electric semi and the electricity used for powering it is from wind or solar energy, it took petroleum energy to get there.

Wind turbines are so large that it takes 3 extended flat beds to transport one turbine wing. What do we do with that much material after it’s no longer useable? How do we recycle the concrete, steel and fiberglass used to build turbines when they are take out of commission?  This question is not one currently being asked, but needs to be addressed.