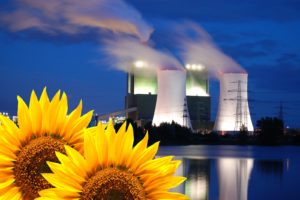 Nuclear power is a type of thermal power in which electricity is generated from steam produced by the splitting (“fission”) of uranium 235 atoms as they are bombarded by neutrons.

The major difference between nuclear power generation and coal or natural gas fired generation is the fuel: nuclear power plants use uranium for fuel, and instead of burning it, they use the heat created by nuclear fission in the uranium.

Nuclear energy currently provides around 19.5% of the United States total electricity needs and is a virtually emissions free electricity source.

Nuclear fission breaks apart an atom, usually uranium, to generate energy. When the atom is struck by a neutron, it splits apart and releases energy, radiation and more neutrons. These neutrons form a chain reaction, striking other atoms of uranium. The resulting energy heats water to make steam, which spins a turbine. The mechanical energy of the spinning turbine is transferred through a shaft to a generator, which converts it into electricity for the grid.

Nuclear fusion joins atomic nuclei together creating a new single nucleus that has a mass smaller than that of the original nuclei. During fusion, the mass difference is converted into large amounts of energy. This process is constantly happening in the core of stars, like our Sun. On Earth, only the lightest elements, such as hydrogen, will fuse. But the process requires extremely high temperatures. Nuclear fusion is for many researchers, the answer to our energy needs. It is being widely studied, but is not yet available to us as an energy source.

• The long-term storage of radioactive waste is difficult. However, recycling of these materials is being studied.
• New plants are very expensive to build and hard to justify in an era of low natural gas pricing.
• Uranium mine tailings may contain radioactive atoms and heavy metals, which naturally occur in rocks and soils.
• Some people are wary of the risks of nuclear energy.

• Research and development require enormous financial and technological resources.
• Despite recent advances, research is at an early stage.
• Researchers estimate that it may be 50 years before commercial fusion energy is available.
• The high temperatures and confinement required for fusion are difficult to achieve.
• More research and development are needed to ensure that fusion reactors produce more energy than they consume.