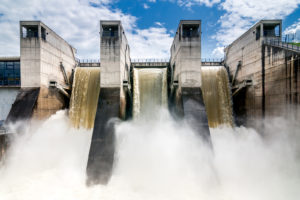 Hydropower is the world’s largest electricity producer from renewable resources.

Hydropower relies on a reservoir and a dam and therefore can be used anywhere in the world that has enough water and the correct topography. Since most of the energy from a hydropower plant is based on physics of gravity, water, and magnates, the carbon footprint is considerably lower than fossil fuel powered energy plants. Given the geographical needs, hydroelectric power in the United States has remained steady for several decades and is not expected to see any growth in the future.

Renewable Resources: 70% of all renewable electricity

Everything has an impact on the environment and some more than others. Hydro electric’s energy impact extends from its generation all the way through its production, transportation, and waste storage. Look at just some of the major ways hydroelectric power effects the environment and a community.

Building a dam is a positive way for human inhabitants to control flooding, irrigate crops and livestock, and create electrical power, but it can have devastating effects on ecosystems up and down stream. Due to dams, many fish like salmon are unable to migrate to their native spawning grounds. Lakes that sit behind a dam, cause problems for aquatic ecosystems as recreational pastimes such as boating can bring invasive species to the ecosystem.

Power generation does not produce carbon dioxide since hydroelectric dams do not use fuel. Negative impacts of dams are found in the tropical regions, as dammed reservoirs of water in tropical regions produce substantial amounts of methane. This is due to plant material in flooded areas decaying in an anaerobic environment, and forming methane, a greenhouse gas. Dams also require large amounts of steel and concrete to build. And as we have already seen, concrete and steel have a significant impact on greenhouse gases.